When the Dog Licks Your Leg, You Better Run

Let me begin with the fact that a house blew up in our community the spring before we moved into town.

I let the dog out before I realized she might be signaling “run for your life” rather than “I really, really gotta go.”

It’s interesting how my mind works. My first thought was not “get out of the house” but “I better call Ellen.”

Because in a crisis I know she has a cool head.

I baked a pie once and caught the oven on fire. Ellen heard me whooping in the kitchen, came in, and tossed baking soda on the blaze. End of crisis. 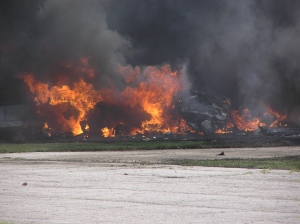 I scraped off the char and the baking soda and ate the pie anyway.

I found an elderly woman on her living room floor bleeding from a head wound. I called Ellen and she called the ambulance.

I didn’t call her though. I called the guys who handled plumbing and heating. I flipped off the lone burning light, shut down the gas dryer and the washing machine mid-cycle, grabbed a change of underwear, and some other things I deemed important.

Yeah, just in case of boom, no more house.

Then I called Ellen and asked her if she had anything of value she wanted me to rescue.

Turns out, after a thorough inspection, things are fine.

Here’s the thing. I didn’t care about anything in our home, not in the moment of crisis. It all could eventually be replaced except for the mementos and family pictures. I’ve lost stuff like that in the past so I know it hurts but you recover.

The only reason I cared about my computer was because it represented my present work and my future hopes in writing.

I learned in an anxious afternoon that I have a current address but it could change in less time than it takes to get out of washing dishes.

I have a home but I’m not HOME.

Questions: How have you handled crises? What would you rescue from your home if you had to get out in a hurry?

I've traveled and spoken around the world but always love to come home. There I eat exceptional meals, drink coffee to my heart's content, and get loved like nowhere else on earth. I believe a community centered in Christ should be all that and so much more.
View all posts by tnealtarver →
This entry was posted in Uncategorized and tagged Crisis, Emergency, faith, Fire, Gas Leak, Grief, heaven, Loss, Priorities, Trouble. Bookmark the permalink.

2 Responses to When the Dog Licks Your Leg, You Better Run