“The Burials of These Babies”

“We interrupt the regularly scheduled programming to bring you breaking news from Newtown, Connecticut.”

We’ve all heard the tragic news from last Friday’s shooting at Sandy Hook Elementary. In a matter of moments, twenty-six souls stepped out of time and into eternity—six women and twenty children ages six and seven. The gunman murdered every soul save one in a first-grade classroom. The lone survivor feigned her own death as her classmates were gunned down.

In a poignant commentary, Joe Scarborough said, “Today as a nation, we grieve; and today we as a people feel helpless.” He spoke of soon watching “the burials of these babies.”

Questions abound in the aftermath of the massacre. I’m sure these three questions have surfaced in various forms and with various degrees of incredulity. Is there a God in heaven? Does He know about what happened? Does He care?

Don’t take these next words as glib or callous. They are not.

Every moment of every day, someone steps out of time and into eternity.

Every moment of every day, someone dies.

Every moment of every day.

The trip has always been one way—from time into eternity. This has been true of Ancient Egypt’s pharaohs … or  first-century Roman captives led into the Coliseum … or Civil War casualties … or Holocaust victims … or starving children in Africa … or first graders at Sandy Hook Elementary.

“The Word became flesh and dwelt among us.”

The Son of God stepped out of eternity and into time. He brought light into our dark world.

A mass shooting during the height of the holiday season is about as dark as it gets. Yet, in the midst of tragic death, the mystery—One who steps out of eternity into time—lives. “The light shines in the darkness, and the darkness has not overcome it” (John 1:5 NIV).

Is there a God in heaven?

Yes, and over two thousand years ago, He stepped out of eternity into a stable connected to a Bethlehem inn.

Yes, God knows. Jesus said that a sparrow doesn’t fall from the sky without God’s notice. He also said God knows the number of hairs on our heads. He knew, knows, and forever will know the names of all twenty-six victims from Friday’s massacre.

Yes, God cares. After talking about “the birds of the air” and “the flowers of the field,” Jesus said, “Are you not more valuable than they?”

After Jesus raised a widow’s son from the dead (Luke 7:11-17), witnesses testified, “God has come to help his people.”

On Friday morning, December 14th, at Sandy Hook Elementary, twenty first graders and their teachers stepped out of time into eternity.

On an evening long ago, in a distant land, One stepped out of eternity into time.

Isaiah spoke a prophetic word centuries before the birth of Christ. “The people walking in darkness have seen a great light; on those living in the land of deep darkness a light has dawned” (Isaiah 9:2 NIV).

Today our nation is a “land of deep darkness.”

But in this Christmas season, we remember the Light who “shines in the darkness and the darkness has not overcome it.”

“In the Wake of the Newton, CT–Turning to the Psalms” by Jon Stolpe 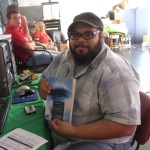 For more of what People Are Saying follow link.

I've traveled and spoken around the world but always love to come home. There I eat exceptional meals, drink coffee to my heart's content, and get loved like nowhere else on earth. I believe a community centered in Christ should be all that and so much more.
View all posts by tnealtarver →
This entry was posted in Bible truth and tagged Christmas, God cares, God knows, hope, Jesus, Joe Scarborough, light, Sandy Hook Elementary, School shooting, the Voice Tribute. Bookmark the permalink.

8 Responses to “The Burials of These Babies”