“So he got up and went to his father.

But while he was still a long way off, his father saw him…”

I want to offer my puppy-turtle-love theory for the ONE’s front-porch wait. Note the word “theory,” as in “I think this” versus “I know this.”

I often venture along the dike near our home. Many times Penny, sometimes known as my interactive alarm clock, accompanies me on those hikes. Once Kong, my pet snapping turtle, came along as well.

When I released Penny from her leash on that occasion, she bounced around the reeds and underbrush, galloped along the wood’s edge, and snapped at butterflies and bumblebees.

Fortunately for the butterflies, she missed.

Fortunately for her, she missed all the bumblebees also.

When I called for her to come, she sat down and stared, thought about it then thought about it some more. After a great deal of puppy pondering (who knows what goes through a dog’s head?), she flipped her head back, leapt in the air, and trotted to me with tongue lolling.

For me, a dog’s enthusiasm makes up for a lot of misbehavior. As my brother-in-law Neal once said about kids, “They spend the first two or three years making deposits in the cute bank. After that, it’s pretty much withdrawals. What you hope is that the two balance out in the end.” Puppies tend to make investments and withdrawals, often within moments of one another, all day long and well into the night.

Now Kong is pure snapping turtle. If you classified his personality, you’d do well with “disgruntled.”

But let me begin with the plusses of a pet snapping turtle.

Well, there isn’t a second unless you like your pet to be described as “scary looking” and/or “frightening.”

On the aforementioned trek along the dike, I brought Kong along in a bucket. When we arrived at the mosquito-infested swamp, I tipped the bucket and allowed Kong to stretch his legs, neck (which is amazingly long), and whatever else he wanted. He stretched everything straight for the swamp. 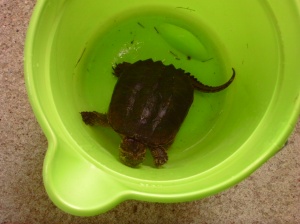 Puppies smell, well, stinky stuff (then roll around in it).

Within moments, he disappeared into the muck.

No amount of whistling, whooping, hollering, or even turtle treats will now attract Kong to come home. He sank into the swamp and I hold no hope of his return.

Because without the former, a turtle dies.

Without the latter, he flees.

I think the ONE waits on the porch for our return because He prefers enthusiastic puppy love over confine-me-feed-me turtle love.

That’s my theory and I’m sticking to it.

Question: Can you describe something or someone who returned to you?

I've traveled and spoken around the world but always love to come home. There I eat exceptional meals, drink coffee to my heart's content, and get loved like nowhere else on earth. I believe a community centered in Christ should be all that and so much more.
View all posts by tnealtarver →
This entry was posted in Uncategorized and tagged God's patience, love, Returning hom. Bookmark the permalink.